Bertha stole my hair tie and other summer tales

July, a time for rest, recuperation, recovery, a half way point in the racing calendar, a chance to gear myself up for the second half of the season. 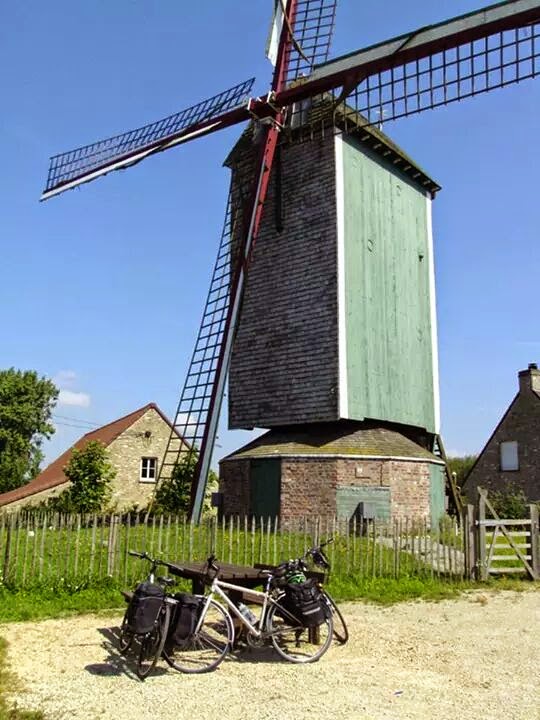 I decided not to race in July. Last year I reached my main race, the World Age Group Championships in London, tired. Physically and mentally worn out. So to prevent a repeat this year, I thought a mid season breather would do the trick and enable me to finish the season with a strong flourish.
So we cycled from Calais to Amsterdam on Hybrid bikes, panniers full (mainly of Belgium chocolates) taking in the delights of northern France, Belguim; mainly the waffles and chocolate and Holland; no clogs, but we did see a token windmill or two.
Rest and recuperation is different for everyone, right?!

July was a great month, not that I am biased, being a Cancerian (8th of July, don't feel like you have to get me a birthday present, but you have the date now).
I was inspired, aplenty as the Tour de France swept through Yorkshire.
Day one highlights was witnessing Jens Voight's solo breakaway, this was the colourful German's 17th Tour, pretty impressive. His post stage interview is worth a watch. He really lives up to  his #shutuplegs slogan! 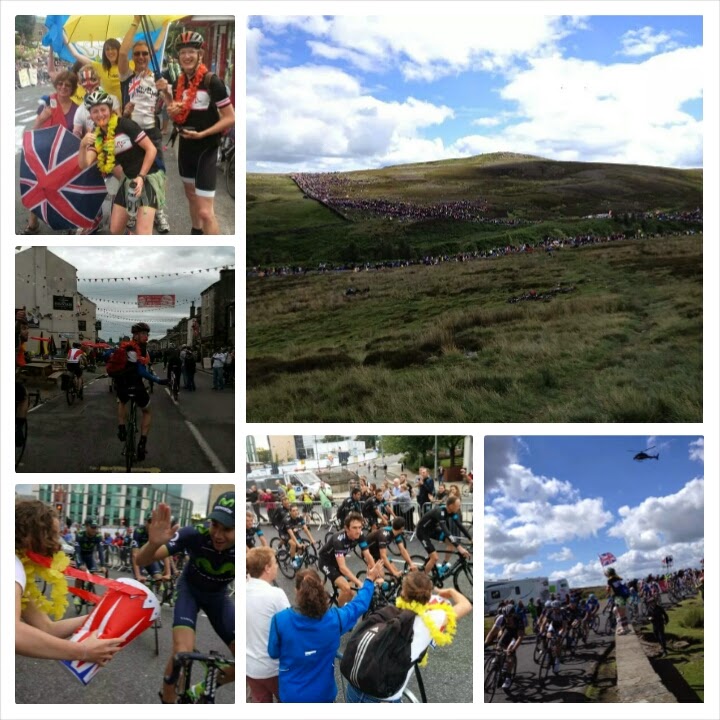 Some of the highlights from the Tour Weekend, including watching the parade in Leeds City centre, with Drum and Whistle. Grinton Moor Hill lined with spectators, Adam and Pete with the party hooters in Hawes and cheering the peloton on at the top of Grinton Moor. If you are going to spectate you may as well do it properly with all the gear... 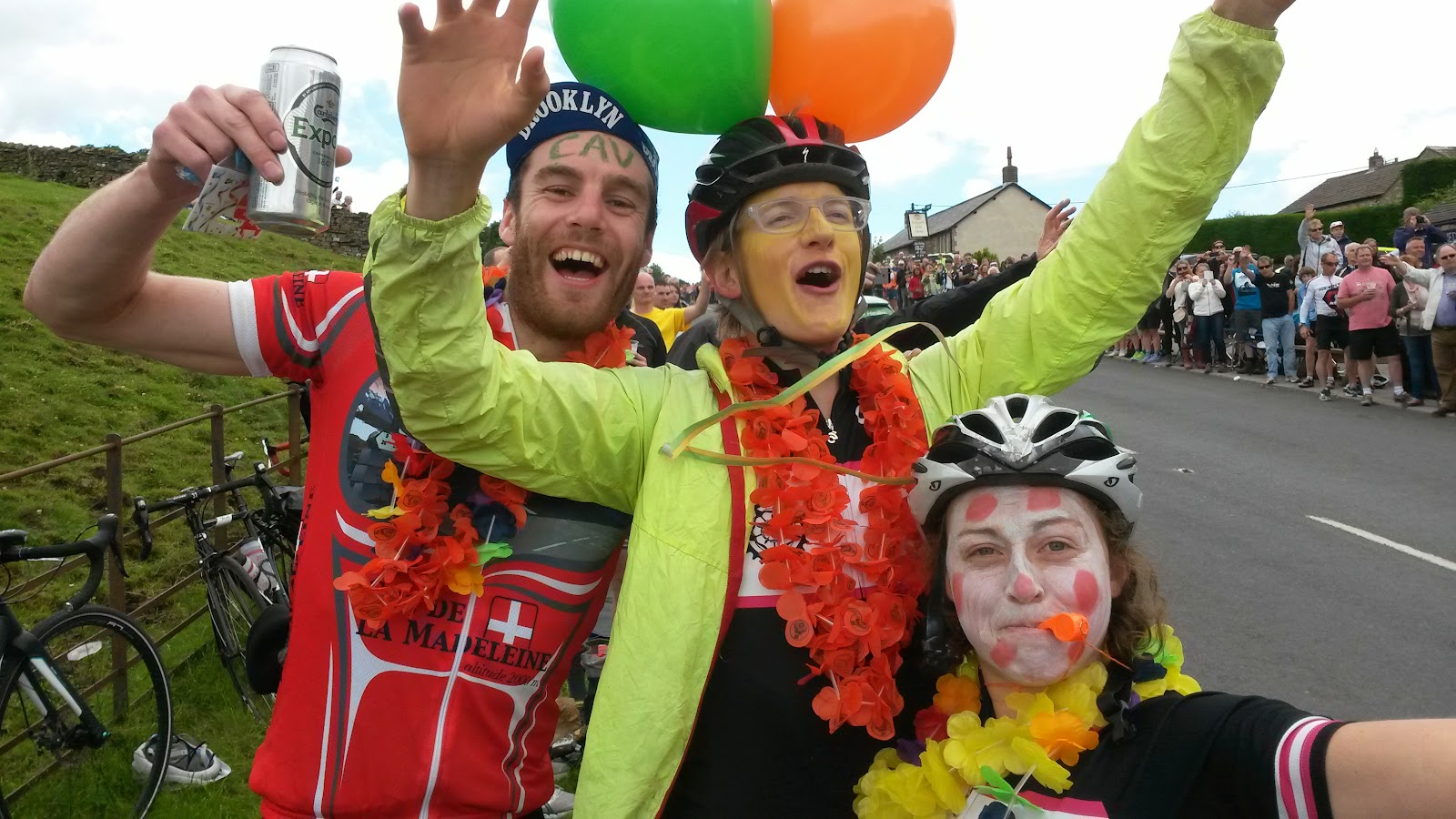 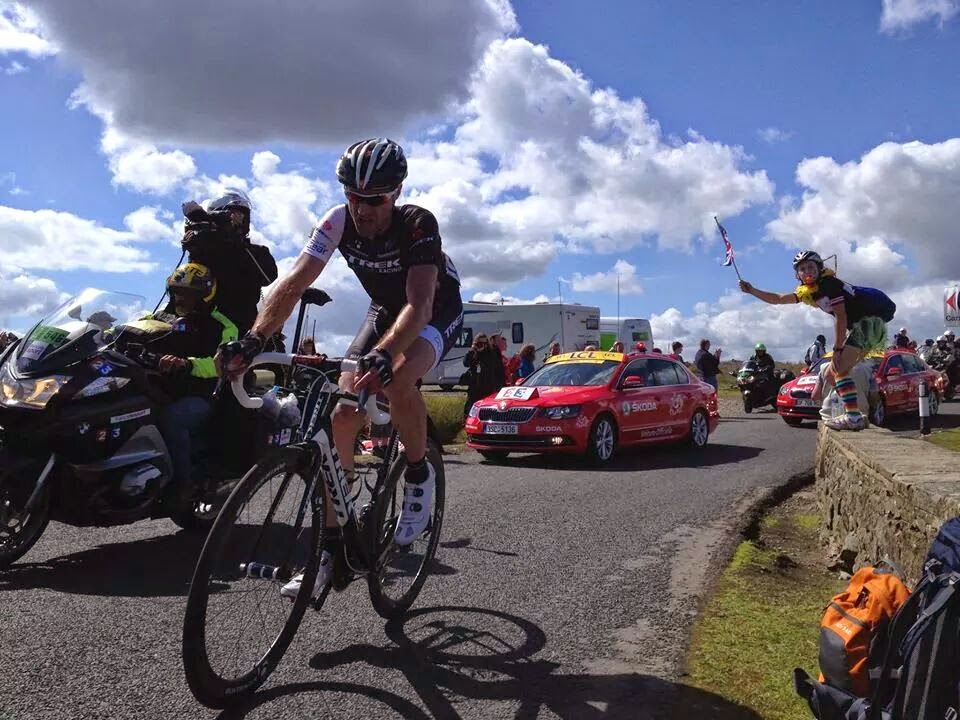 Cycling, as a theme dominated much of life op north. Beryl Burton, the play, shown at the West Yorkshire Playhouse in leeds, depicted the Life of Beryl Burton, arguably the most prolific British female cyclists of all times.
The play was outstandingly good, full of slap stick comedy, entertaining and humourous it gave a real insight into an incredible lady. This picture shows the stage in the final scene, the stage littered with the trophies that mark Beryl's remarkable achievements such as five times world pursuit Champion, Thirteen times national champion, twice road racing champion and twelve times national champion.Read more about the incredible Beryl Burton here.

Inspired by Beryl, Jens Voight and all the guys in the Tour, off we trundled on our trusty Trek 7.0s, across to Europe of the Ferry for a week cycling from Calais to Amsterdam. 'We' being Foley, Jo and Myself, friends from our Loughborough University days. We started university life together, and ended it as house mates and great friends in Edelin Road, with many adventures in between, many, being far too inappropriate to recall in this public sphere of cyberspace. Every year since graduating in 2009 we have got together for a spot of cycling, 2009 was Lands End to John'Groats; a two man tent between the three of us, no cycling experience, 3 new hybrid Trek 7.0s, that we believed were the bee's knees and a few pages of the road atlas ripped out to guide us the length of the country. We survived, and each year more cycle adventures have followed. 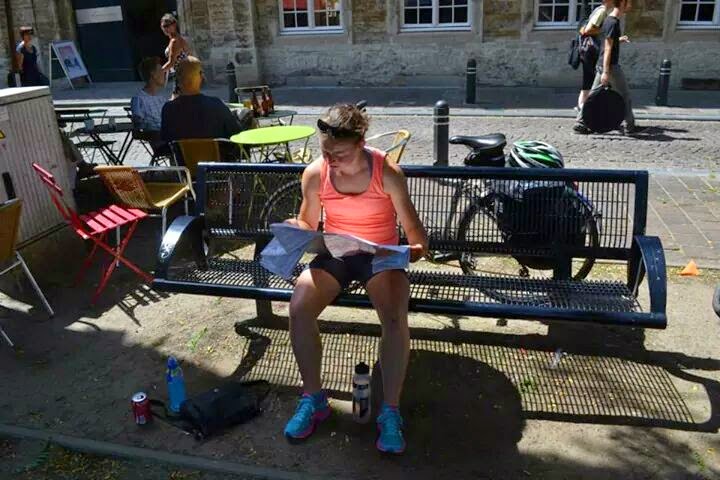 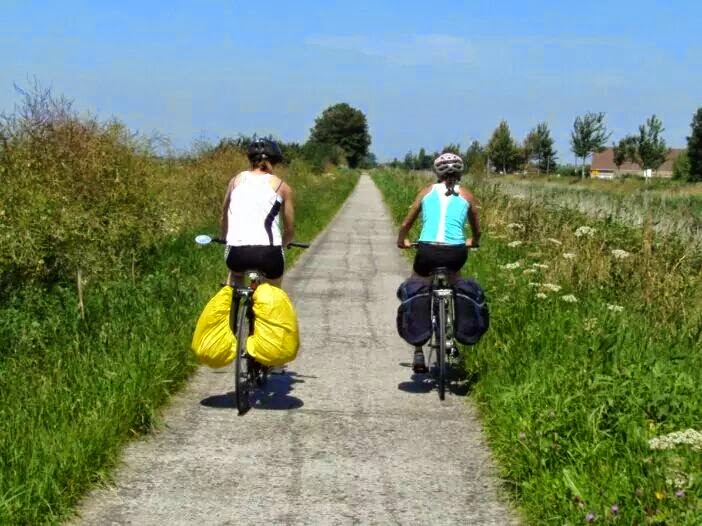 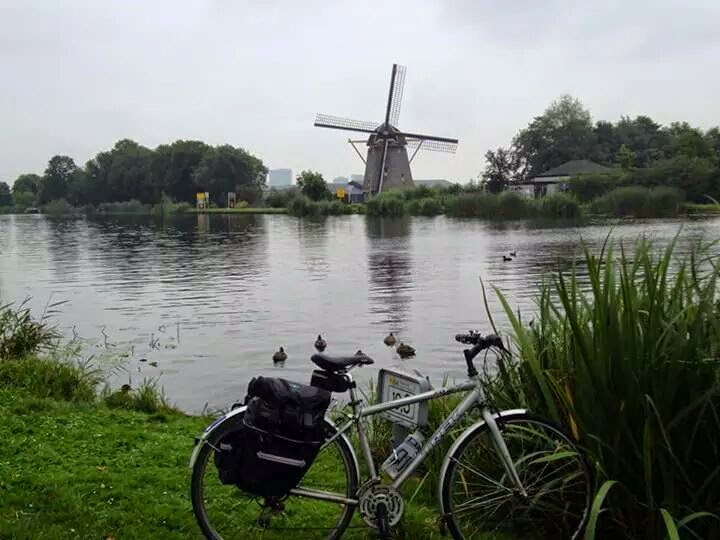 It's Holland, there has got to be a windmill somewhere..

Back in the country, Trek 7.0 hybrid back in the garage, road bike out, i realise I better crack on with a bit of training during July seeing as i had a few races lined up. 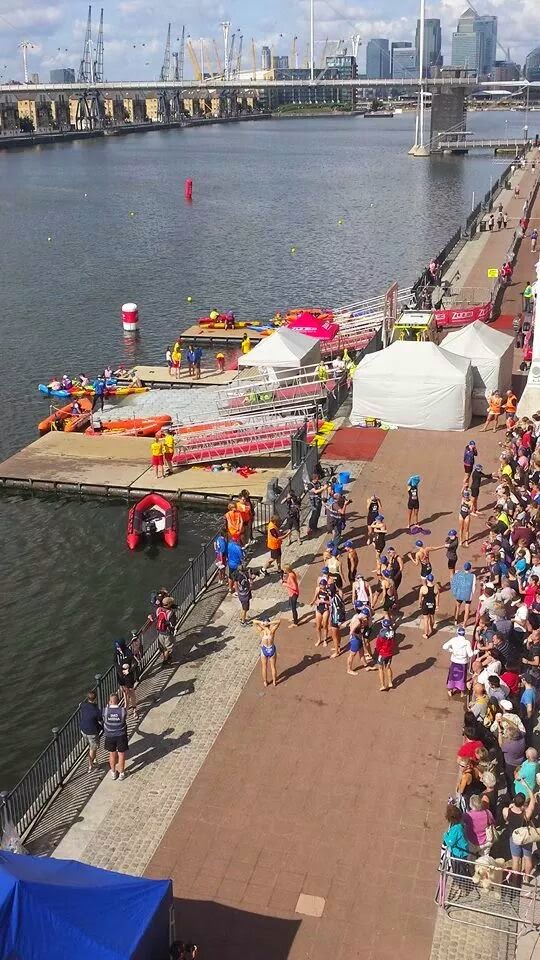 A good year's progress! but still along way to go, to be at the sharper end.
What to say about the race? What makes a good race report? Drama, action, suspense? Well I am not sure I can provide much of that. I sat on my bed, in the cheapest hotel in Barking,on race morning, eating my breakfast of rice pudding (from the can, cold, don't knock it till you have tried it! I reckon Beryl Burton would have approved) watching the build up to the Women's road race at the Commonwealth Games. A momentus occassion for Englands, Emma Pooley, her final competitive cycling race. Read about her incredible career here and her future plans into the world of triathlon. An exceptional athlete and one of the key figures responsible for La Course, the women's one day cycle race that ran alongside the Final stage of the Tour de France, in paris, a big step for female cycling. You can read more about it here.

So back to it, fuelled on my rice pudding, and pumped up by the Commonwealth Games action, I got warmed up by negotiating the pot holes and traffic as I cycled through Barking to the Excel centre, remined me of my daily commute from Brixton to Croydon when I lived and worked in South London, just less Jerk chicken shops in North London. 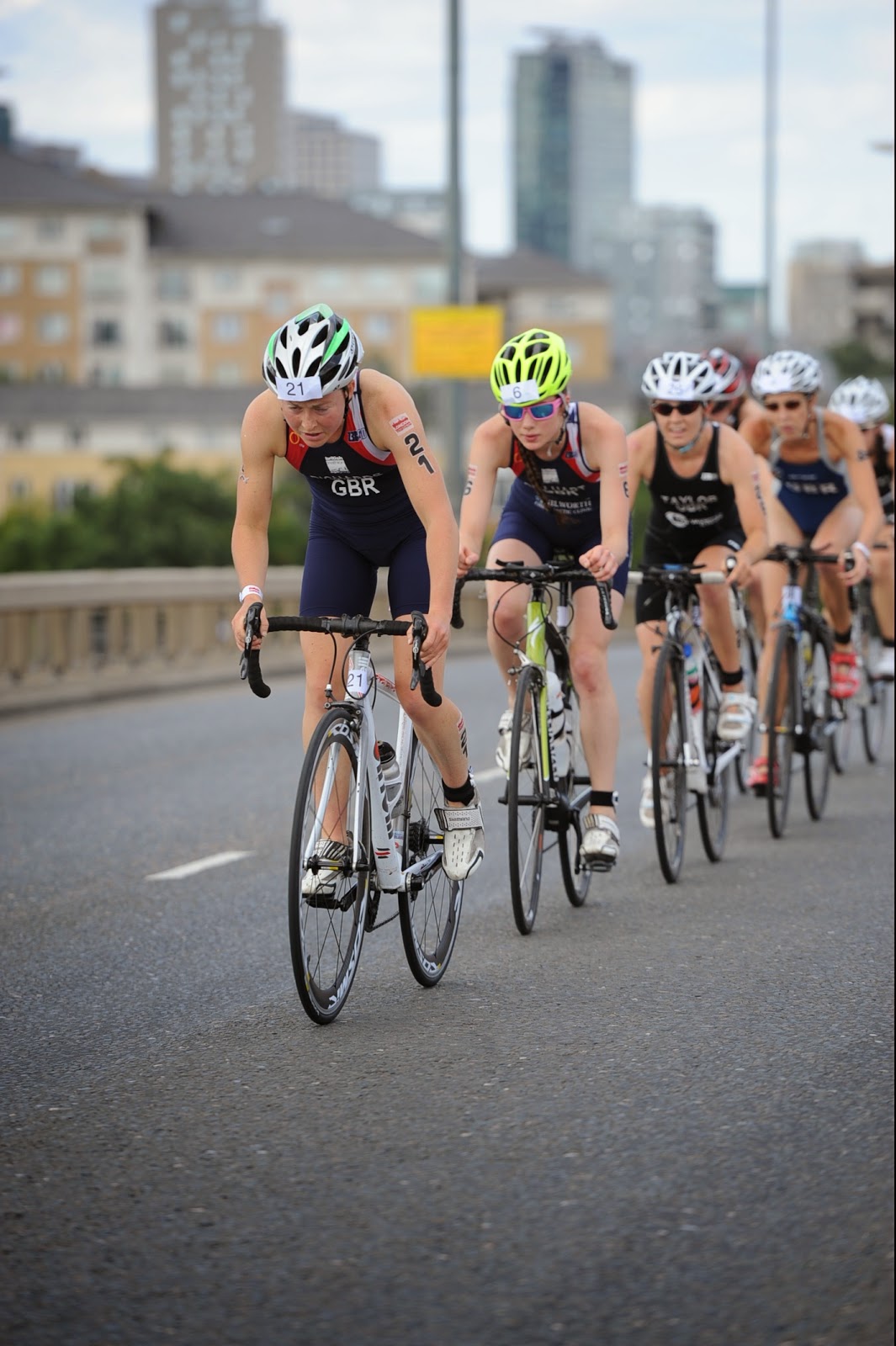 Non wetsuit swim, found me floundering at the back, again, ahhh the swimming frustrations continue. Elo du lart, emerged out of the docklands with me,we set about reeling in people on the bike, 2 up tt'ing around the course, we gathered up a small train. This is where getting chewed up and spat out regually on chain gang, really pays dividends. Onto the run, my legs felt surprisingly intact, started off steady, going out of transition, realising I was heading into a dead-end, 'jump over the barriers' shouted the amused spectators, I was tempted, looked at the official, reconsidered it. Did an about turn and retraced my steps. School girl error and it cost me the 15seconds i had managed to gain on the group coming into T2. Bugger.
Out on the run course, picking up way through, I felt decent, but ran out of tarmac and time to make up much more ground. Basically i need a 200m swim, a 40km ride and a 14km run, that would be ideal for me. Shame it's 1500m, 40km, 10km really.
Pretty happy with the result, times indicate the run had to be short! Someones trundle wheel had a malfunction that morning!? Good progress from last year, though still my swim lets me down. 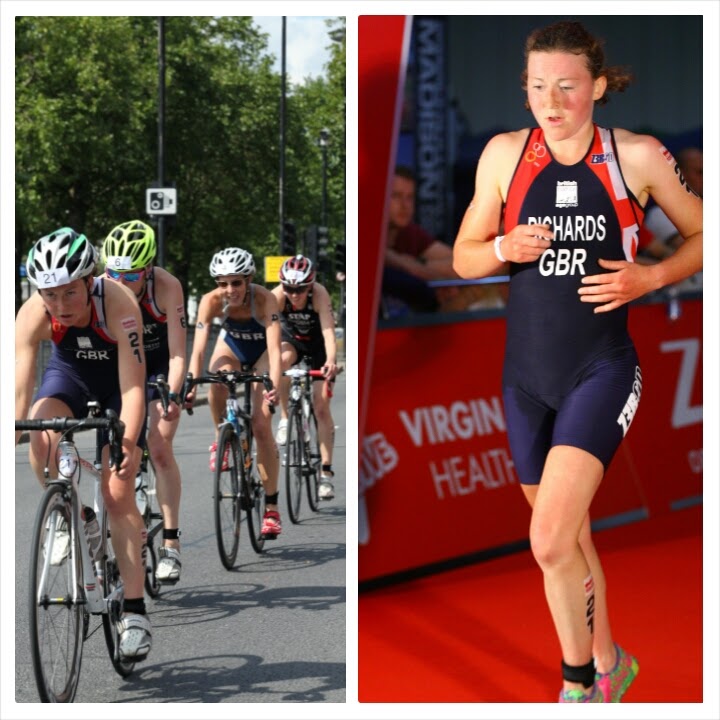 Attacking the bike with a Lion's size Roar having been dropped like a Goldfish in a Sea of Sharks (love an animal analogy!)

It was a good job I had had my curly locks cut a few days before, as Hurricane Bertha whipped my hair tie off my head, leaving me to run around Liverpool city centre looking pretty bedraggled. Wet curls, skewing my vision!
I had great memories from Liverpool last year, an odd thing to say if you saw the results, 13th/16 last year, but cycling with funtastic Sam Anderson and running along a spectator lined run route with buzzing atmosphere was great. With those memories I was looking forward to competing again in Liverpool. To add to the excitment, we had world number one, American Gwen Jorgenson, also on the start line and in a way more excitingly for me, a chance to race my favourite Maltese Doctor, Danica, recently returned to being my neighbour in Leeds after her Commonwealth games exploits. We hadn't raced each other this year, but there had been alot of chat in training so we were eager to renew competitive juices, it was 1 a piece from last year! Not that we are too competitive...

Danica and myself set off together in my Micra, loaded up with bikes and wheels, thankfully 3 pairs, which were needed.
Bike check official " Those are ZIPP SLS?"
Me "Absolutely, look how fast and shiny they are" (me feeling as pleased as punch)
Official " These are not on the official list'
Me "But those bikes have exactly the same wheels" (pointing at least 5 bikes with ZIPPs)
Official "Those are last years model ZIPP SL, they are fine, your's, this years ZIPP SLS, are not on the list"
Me "Because I have a little extra 'S' after the SL on the sticker, they are not allowed?"
(you can imagine what i was now thinking!!)
Mad dash back to the car, through the centre of liverpool, quick wheel change and back, thank you Danica for your training wheels, thats one way of getting the heart rate up.

19.5 degrees, Hallelujah! 0.5 degrees was going to save my arse. 0.5 degrees meant wetsuits were on. That is like giving me a lifeline, or so I thought. Premature happiness, it turned out to be! 3rd to last out the water, the bike was a case of just staying up right in the wind as I clawed my way back through the field. The dead turns and wind made solo cycling pretty tough work. Onto the run, 5km felt pretty short in comparison to last weeks 10k. The picture below on the finishing straight sum's up how I felt; wet, tired, battered by Bertha and so relieved to be done. 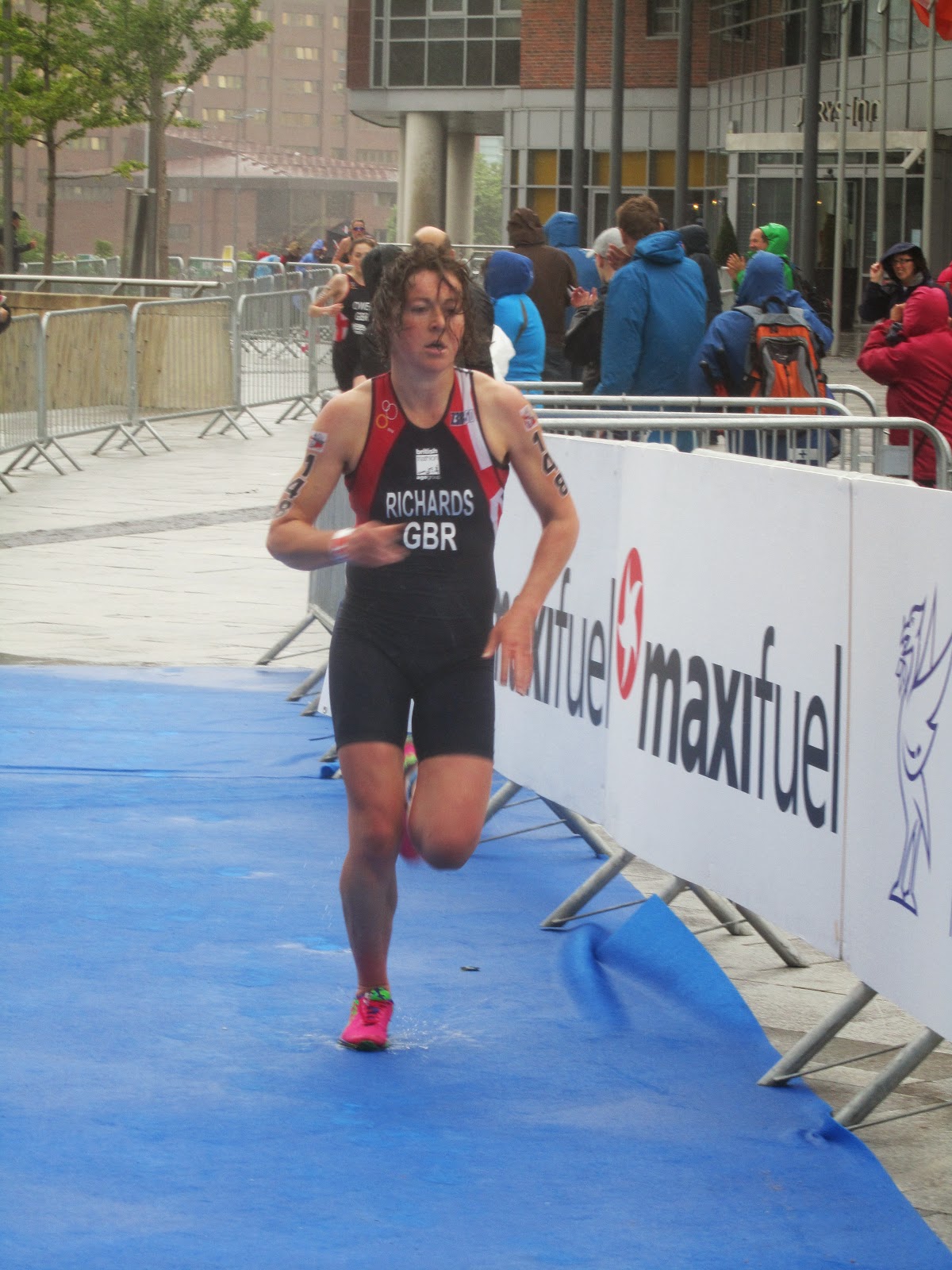 Post race, people were collapsing left right and centre, space blankets were given out. Ah but Suze, you look chirpy and up for a chat, so can you help out WhoelEarthFoods with chatting some nonsense whilst holding a peanut butter smoothie. Click here if you fancy seeing the below interview, nice video by @wholeearthfoods 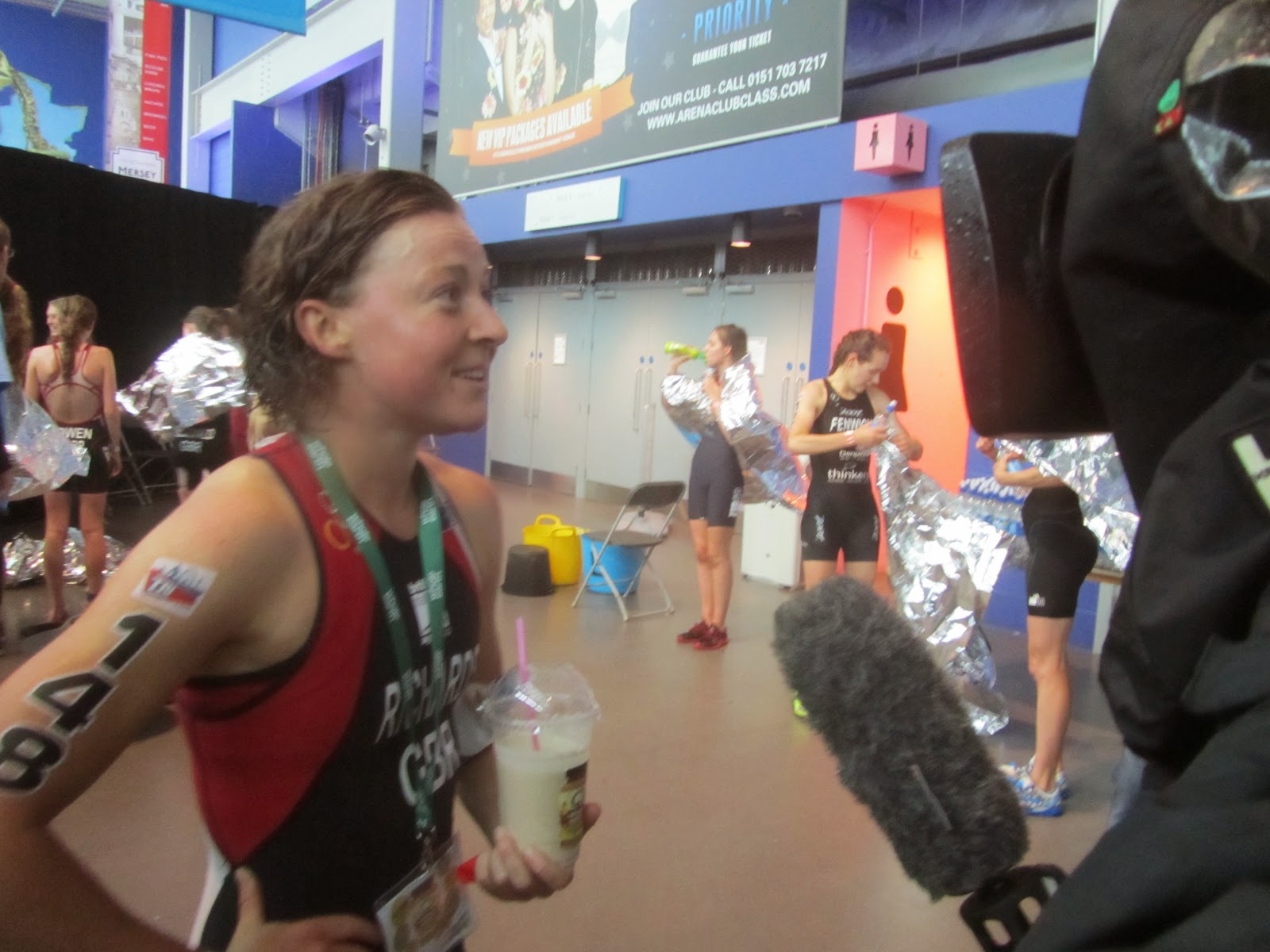 Again the atmosphere in Liverpool was great, despite the weather, the organisation superb and all the volunteers super helpful, can not fault it. 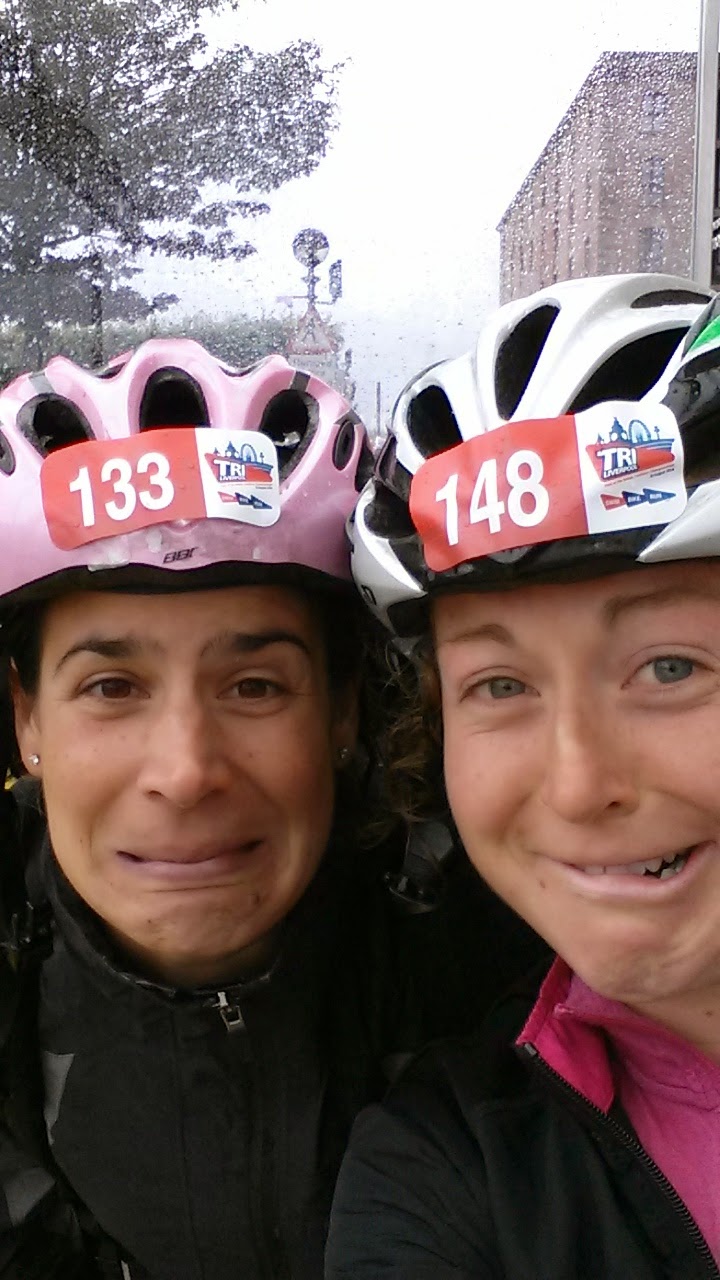 Post race, Danica and myself taking shelter from Hurricane Bertha in a Bus shelter as we battled the elements though Liverpool to the car. (Our competitive rivalry continues as Danica unfortunately had a puncture, though a super swim and start to the bike, makes me think, she would have well and truly beaten me .....next time Danica!)

So July and August have been great, bit of racing, bit of spectating world class sport in fancy dress, bit of cycle touring across europe....

Next adventure is Austria, for the European Duathlon Championships on 24th August. I have been selected for my first elite Great Britain vest. A complete honour.

Right ho, i am off to the gym to get strong and flexible....just like this incredible Ninja Warrior (well worth a watch)