"Next adventure is Austria, for the European Duathlon Championships on 24th August. I have been selected for my first elite Great Britain vest. A complete honour."

That was how the last blog ended. And so this post should, in theory be about Alpine adventures, Bavarian dancing, feasting on Schnitzel, rehydrating on beer and the famous Lederhose garments!
Unfortunately not. My elite GB kit remains in it's packaging at the bottom of the wardrobe, untouched.
On the Thursday, 6 days before my scheduled flight to Austria I took at tumble on Chain Gang (for the non cyclists this is a fast group ride, where your heart and lungs explode!) What happened? I'm not too sure, I woke up in an ambulance, my tyre leavers, spare inner tube and pump still in my jersey pocket and digging into me. The paramedic's were fantastic and provided first class treatment, though obviously not a cyclist as thought i was bonkers when mentioning this to them. Apparently I had gone straight over the handlebars, perils of pot holes. A huge Thank you to the Alba Rosa guys who sorted me out that day. A night in Harrogate hospital with a few broken fingers and a suspected fractured elbow and wrist. Bugger! 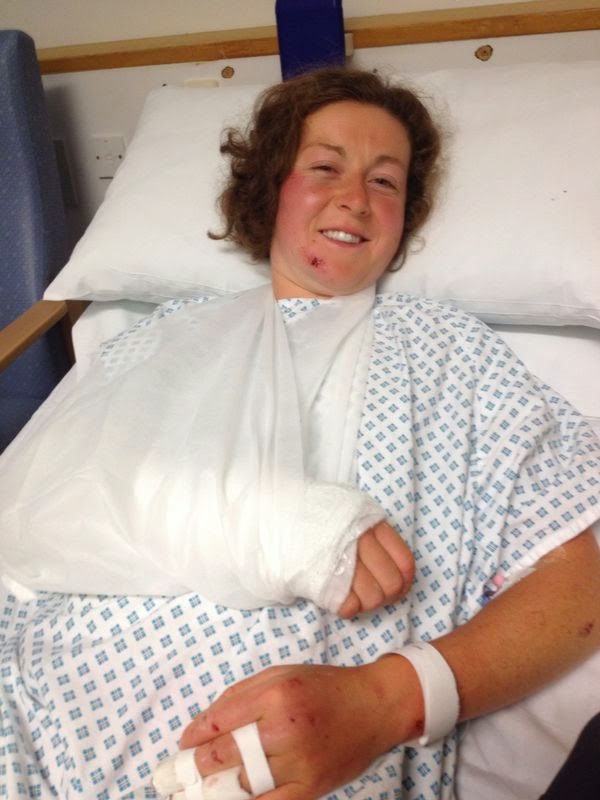 This wasn't part of the plan!

The cast was cut off the next morning as the doctor didn't think it was fractured. Torn tissue on the elbow and a sprained wrist with a few broken fingers and a nice black eye and bruised face. Brilliant I will be able to race in Austria after all.

Wednesday 20th August, bike box packed in the middle of living room, taxi about to arrive in 45minutes, I was off to Austria to make my GB elite debut. I looked at the bike box, how was I even going to carry it around the train station and airport? I couldn't even pick up a saucepan with my right hand, it was still so bruised and sore. I knew in my heart, this wasn't going to work, despite having been sat on the turbo in the last few days in a valiant attempt to convince myself i would be OK, I still couldn't put any weight on my handlebars. A big Thank You Dave Newport for being such an understanding GB team manager, one of the hardest phone calls I have had to make.

When the dream of competing for your country at the top level disappears what do you do? Go to your mum's, curl up in a ball on the sofa and drink copious amounts of tea! The perfect way to heal the body and soul. Thanks Mum and thank you to everyone for the cake,rocky road (Jo), jokes, phone calls, messages, they made me smile.

What next? I could call a day on my season? It had been good, I had achieved some decent results. Yes it would end on a low, but my body was battered. I couldn't even touch my head, my elbow wouldn't bend, my fingers were broken, my face was a mess. But I still had two races on my radar, the Sandman and Snowman Triathlons, part of the three race series in North Wales, organised by Always Aim High. I had won the first race in the series, The Slateman and the lure of returning to the magnificent North Wales scenary and the small issue of an awesome series prize played on my mind.
So with the help of my coach, Lou, some innovative adaptions to training, one armed swimming, turbo training and some strong bandages and a lot of Ibuprofen, I got back to business, preparing for Sandman Triathlon in Anglesey on Sunday 21st September. 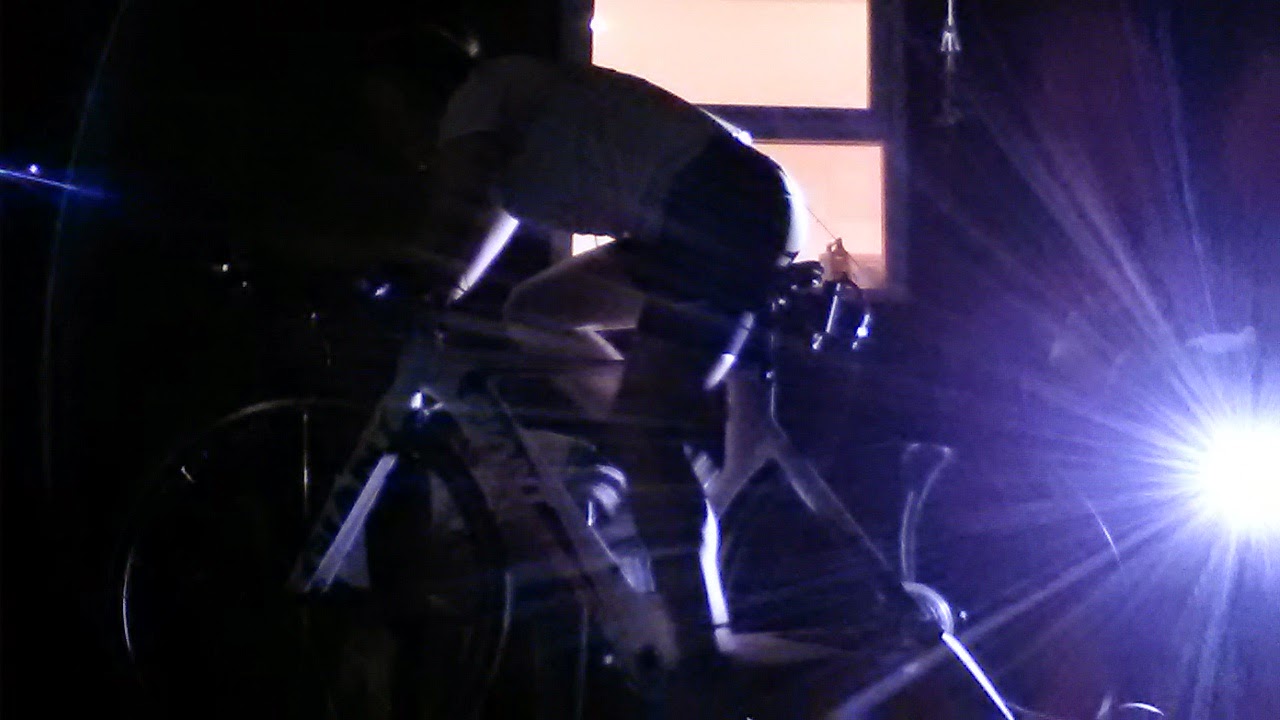 Wrist in a splint and a few broken fingers requires some different training.
Me "I'm not designed for the turbo, i'm meant to be out in t'dales"
Coach lou "Yes and your designed to have two working wrists"
Long turbo sessions into the dark it was, good job my neighbours already thought I was crackers!

Anglesey, you were so worth it. Newborough forest and Llanddwyn beach, what a stunning venue for a race. Thanks Always Aim High for such a high quality event. 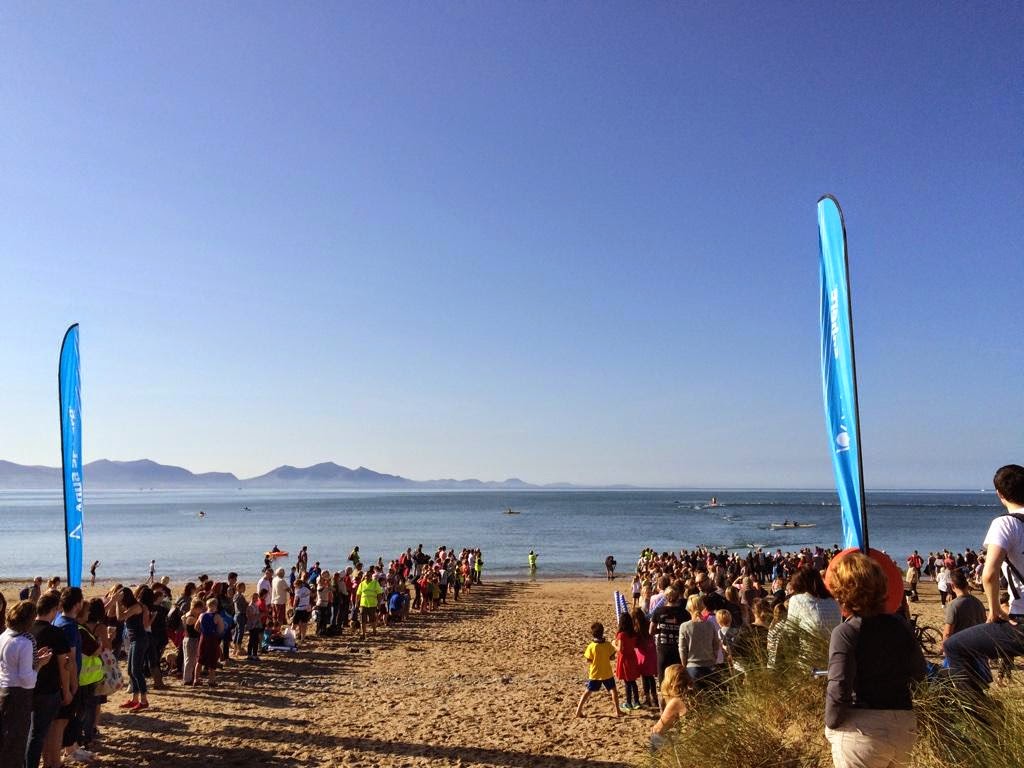 Thank you to Rohan for putting Adam and myself up on your lounge sofa's and making us feel at home. Obviously it was all plain sailing. We arrived on Friday evening, would chill out and recce the bike course on Saturday, have a dip in the sea and be ready for race day on Sunday. The bike recce went well. Adam even made a a little video of it, which you can enjoy here. Unfortunately bank cards are not widely accepted at cafes in this part of the world, so lunch was put on hold. "It's not too far, just a short walk" I tried to convince Adam. It was MILES! from the registration to the beach. Keen not to have the long walk back up after having a dip in the sea, we hitched a lift from Jay and Nikki in their super cool red van, back up to our car. Feeling very chuffed with ourselves for avoiding the long slog back up from the beach, we headed off for a very late 4pm pub lunch. On returning to Rohan's house in Bangor I realised I had left my wetsuit in Nikki and Jays red van! All I knew was that Nikki and Jay were staying at a campsite and vaguely recalled them talking about some vineyard. Leaving Adam to cook dinner, I headed back to Anglesey to search of a red van in one of the many campsites. After some searching and asking a few locals I pulled into a field. There were Nikki, Jay the red van and my wetsuit drying in the sun. Relief!
I had heard, like the Slateman, the Sandman would be tough. A sea swim, a longer than normal bike at 63km and a 10km run on sandy trails, sand dunes and the beach. It was Brutal with a capital B. The run was probably the toughest 10km run i have ever done, flipping heck, it was tough. However the sun shone, I swam and rode hard and survived the run to break the tape first and keep myself in the hunt for the series prize.

The smile says it all! 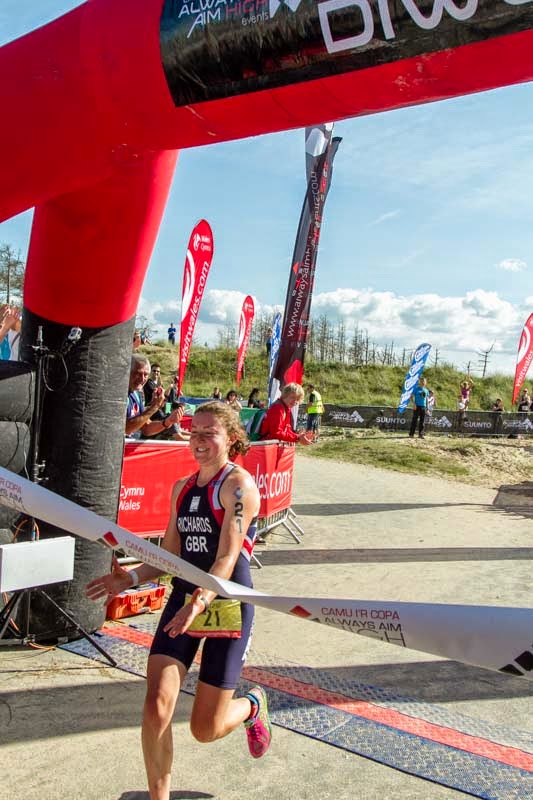 A stunning race venue, but some serious pain. Brutal and Beautiful! 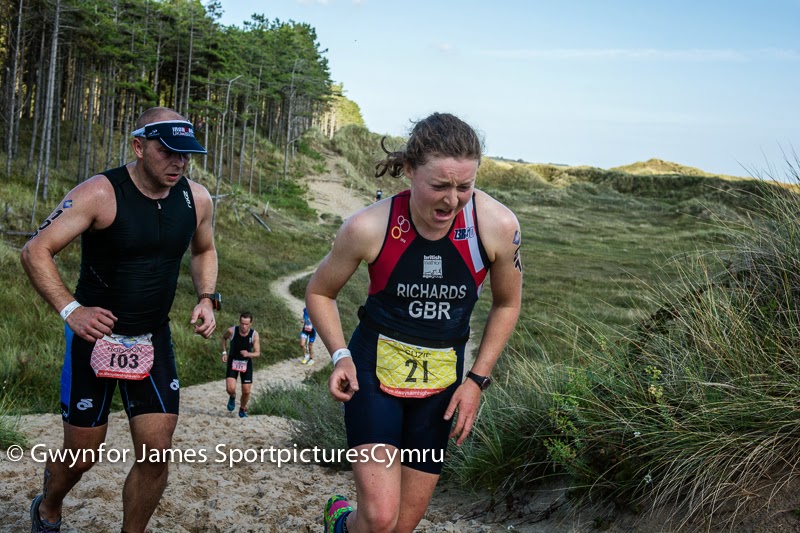 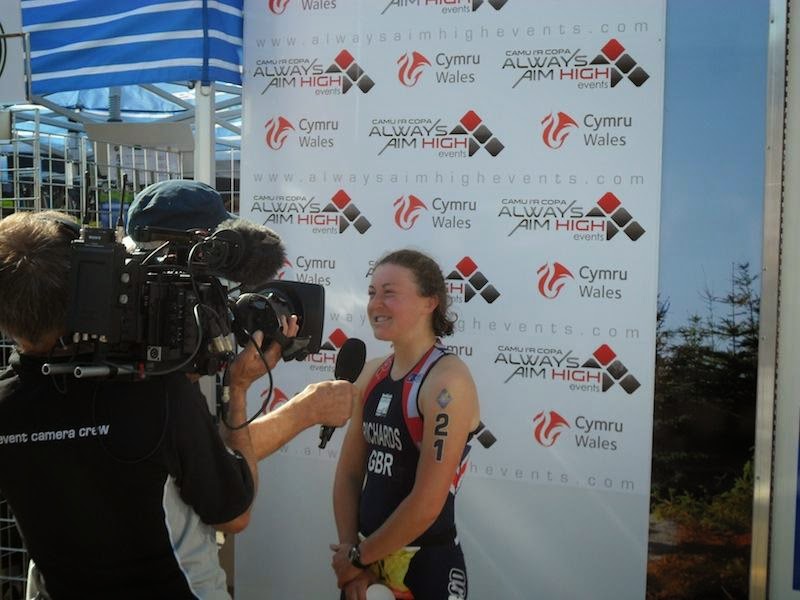 You can catch the action and my post race ramblings on Channel 4 and Eurosport in the near future!

A HUGE THANK YOU to everyone who has helped me survive the roller coaster last few weeks. 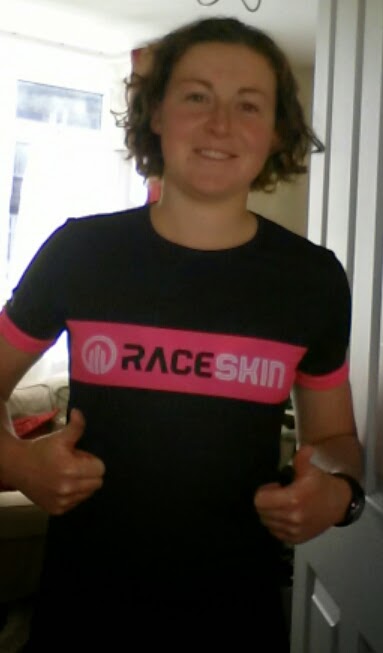 And hot off the press, exciting development is i have my first ever sponsor....drum roll...I am proud to say I will be racing and training in RaceSkin kit, so a huge thank you to Colin at RaceSkin (www.raceskin.co.uk) for this opportunity, more on this in the next blog post.