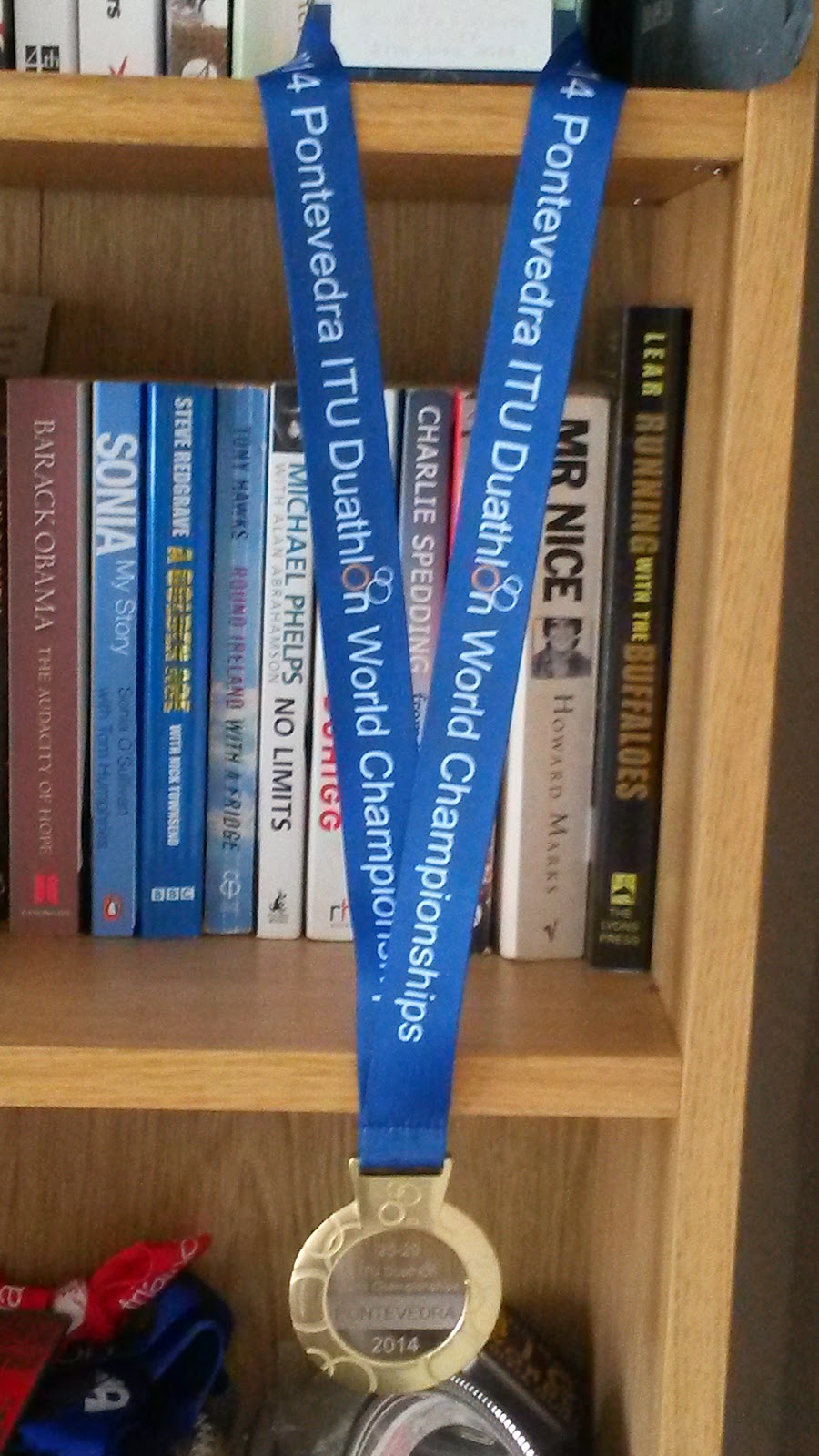 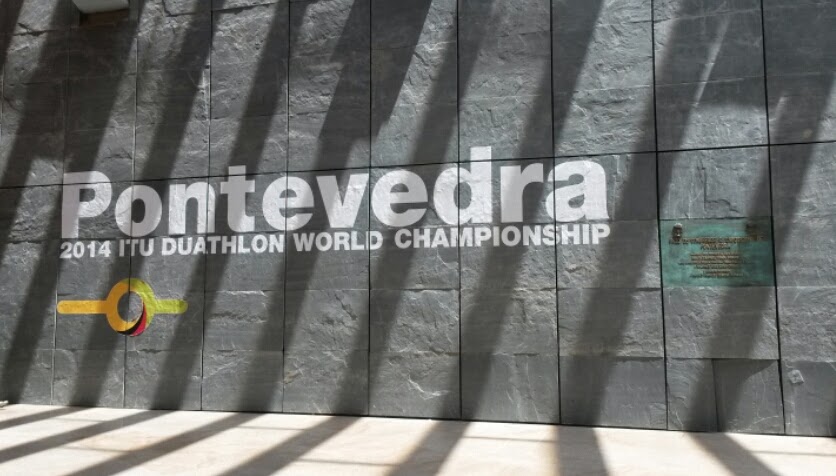 Sunday 1st June 2014, I won the World Age Group Duathlon Championships, and I hadn’t had a cup of tea for 4 whole days!

Nice new addition to hang from the book case.
Gold in the 25-29 age group at the World Duathlon championships, Pontevedra, Spain. Fastest Female overall in the first female wave, everyone under 50 years of age.
Suzie ‘World Champion’ Richards, seriously?! So here is how it happened…
A smooth, non complicated journey to Pontevedra, seamless and no stress, the ideal athlete preparation for a World Championship race. Sounds great, way too ‘sensible’ for me…

The Suzie way to get to the World Duathlon Championships:
If the start is bad, it can only get better! On Wednesday morning I had cycled to and from the pool in a torrential downpour, I don’t even know why I bothered trying to dry my clothes out under the hand dryer for the cycle home! Quick change of clothes and I was off to spain....
- 1st leg, Leeds to Manchester on the train, bugger, the bike box broke and one of the two wheels fell off while exiting the lift at Manchester airport.

-Flight to Madrid and couchsurfing with Silvie, Roberto, Tomas and Gilberto in central Madrid, 3rd floor apartment. Note 3rd  floor, note I have a bike box (that is broken) and a backpack, both are heavy! Thank god I have been working out in the gym. Couch surfing is a network of travellers on the internet, where travellers host other travellers for free (best to tell your Mum after you have done this, rather than before!)

-So I was staying on Silvie’s couch, they took me out for tapas, just some sausage, omelette, on bread topped with a chilli “good race fuel” Silvie assured me.

-Next day, a 7hour train journey to Pontevedra, the train driver looked at my bike box, looked at me, ‘no no no no,’ were the only words I could make out. I smiled, nodded ignored him and pushed the bike box onto the train, squeezing it into a space it obviously wasn’t going to fit and sat down, ignore ranting train driver, thankfully he gave up and the train departed.

-Taxi drivers do not like taking a bike box in their cabs, fact. Thankfully I met Jose, an exceptionally cheery taxi driver who sang along to Howard Jones on repeat and patiently tried to understand my non existant Spanish, we somehow arrived at the correct €30/ 3 night deluxe hotel. Getting the bike up and down the stairs to my room on the 4th floor, without knocking over the pot plants, was one of the bigger challenges!

Journey accomplished Leeds to Pontevedra, on a shoestring budget.

It emerged that quite a few of the GB team were staying out in Combarro, a coastal village, 8km along the coast from Pontevedra, including Chris, Alister, Jackie, Mark from TRiKS (Triathlon Kidderminster and Stourport) and Mark and JP from Leeds Bradford Tri Club. Thank you all for keeping me company, giving me lifts, letting me gate crash your meals etc

Right, on the race, I am sure there are many ways to win a World Championship but here is my version:
Preparation: Getting somewhere early is not my forte, but as Alister and Chris were competing in the sprint race at 8.30am I decided to get a lift with them at 7am and relax on a street bench with my book, café con Leche (Yorkshire Tea substitute) and croissant. It was great cheering on everyone in the Sprint race, well done everyone, especially Jackie for winning her age group. Not so great that my chosen bench was outside a night club and at 8.30am the last clubbers were falling out onto the curb side and joining me on the bench.

Warming up: Being English, the hottest temperatures I experience are when cooking dinner, stood over the hob. A midday race start, in Spain, excited me no end, warming up was jogging to and from the toilet. 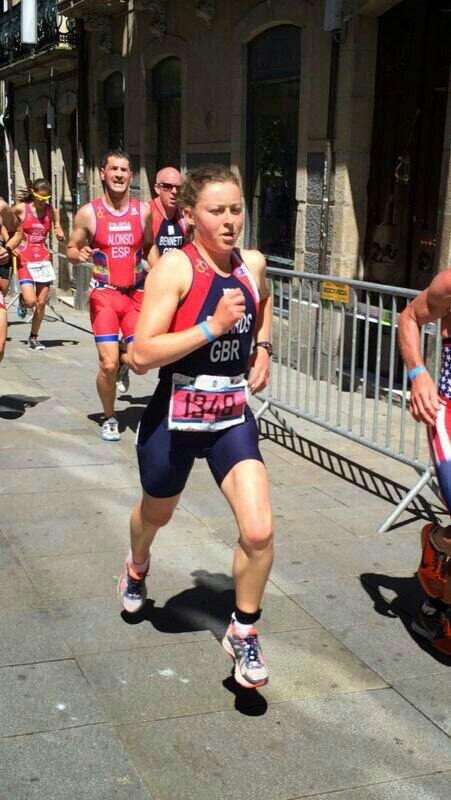 Run 1, 10km: The horn went, the race started, all the females under 50 years of age were in our wave, a few shot off, I didn’t. Its midday, its hot, we have 10k to run, then a 40km bike ride then a 5km run, it’s a tactical affair I thought.
I caught the lead ladies at the end of the 1st run loop, a 2.5km circuit, with a small hill, it twisted and turned through the old town and through the stadium, 4 laps were completed and 3 of us emerged into collected our bikes together, fellow Brit Louise Fox, a French athlete and myself. 37.59 for the 1st 10k, feeling good.

Bike: The 40km bike was 2 laps of a 20km circuit, 10km of which were up a hill, turn around and come back down. I do love a hill, so up up up I went, I over took the French athlete mid way up the hill on lap one, I fully expected to be caught on the downhill,  at 5 foot 1, weighing in at 50kg, there is only so fast a midget can go downhill. In the big gear, legs pumping, no braking on the turns and somehow I entered the stadium in 1.11.56 to drop off my bike and start the final run in 1st place. 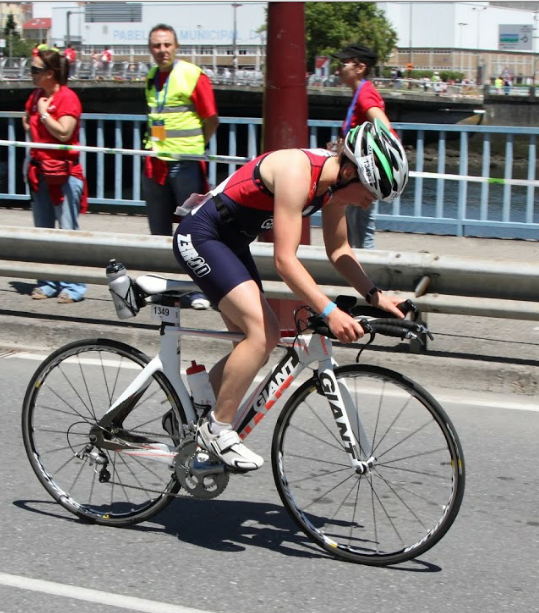 2nd Run, 5km: Fellow GB athlete Sarah May, who had won Dambuster Duathlon back in March and absolutely crushed me then by a good few minutes, came alongside me during the first lap of the final 5km run. I fully expected to see her disappear off down the 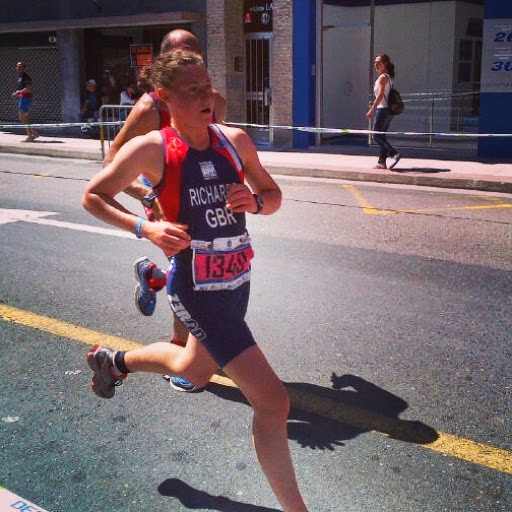 street, but we ran together, grabbing water at every opportunity. Go Go Go I thought on the hill on the final lap, I put in a little surge, and was really encouraged by the cheers and yells from the crowd which was several deep all the way round the course in the old town, I tried to forget about the pain in my legs and went for it. I knew Sarah wasn’t in my age group but I wasn’t really concerned about that, I really wanted to be 1st female across the line, not just 1st in my age group. Arms pumping, sweat dripping off me, feeling like I was being roasted on a BBQ I dug in for the final few km, I entered the stadium to hear the loud speaker announce I was 1st lady. Done, World Champion, 2 hours 13 minutes 2 seconds of racing, what a sweet feeling.


Unfortunately I wasn’t able to stay for the award ceremony, my night train back to Madrid was at 9.30pm so instead I celebrated with wine and pastries courtesy of the American Duathletes also on the train. A merry band of us celebrated on the train as it chugged along for 10hours to Madrid. I arrived back in Leeds on Monday evening, just in time to get a quick swim in at the pool. Next race was in 6 days time, the 1st of the British elite super series races at Blenheim Palace. No time to rest on my laurels…I will save that race report for a future blog. If you are interested take a look at Sam’s cracking report here, including video footage and pictures.

A huge THANK YOU to everyone who has been part of the journey. Mum and Dad who have spent hours stood in muddy fields supporting, marshalling, carrying the track suits, washing the endless sports kit, celebrating and commiserating over the years. To all the friends I have made along the way; who I have sat in ice baths with, trudged up hills with in the sun, hail, snow and gale force winds. Your banter and laughs have kept me going. To the many coaches who have guided me, told me off, supported me and patiently helped me, thank you. Finally, Adam, you make me laugh everyday, even when you dig your elbow into my sore glutes and I squirm and yell at you, you tell me it will be worth it when you 'help' push me out of bed for morning swimming. And it has, it has been well worth it and I hope this is just the start, the first step on the ladder, with many more tales to come. Thank You to everyone. 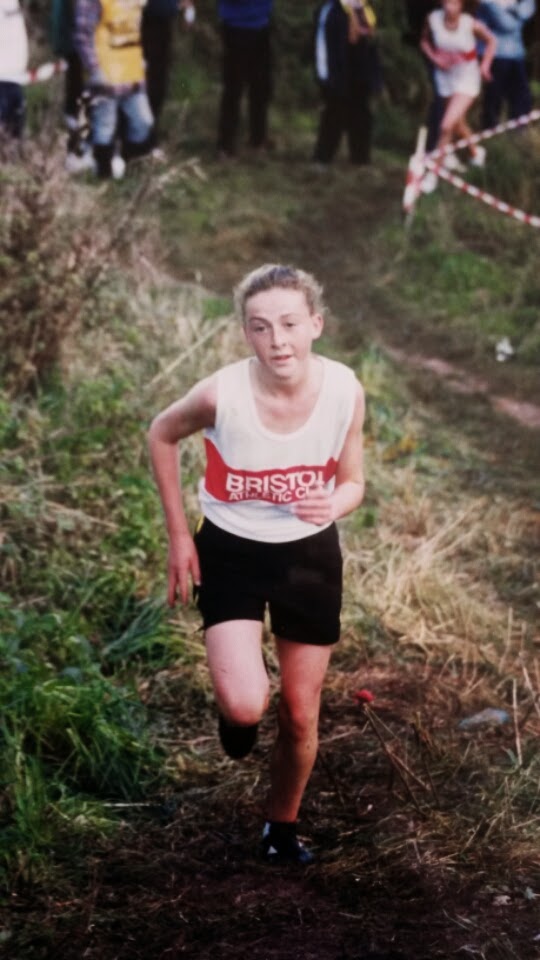