"Ummm yup, should I be nervous about this?"


"I have been up there once, it was a days hike"


"Oh, we can't be going all the way to the top if it's part of a triathlon, its only slightly longer than a standard Olympic distance triathlon"
Ignorance is bliss!!

Snowman Triathlon, 750m lake swim, 69km undulating bike and 9km run up and down Moel Siabod (872m high). The final race of the 2014 season, race number 11 and I'm glad I had stuck to my normal pre race routine of being totally naive & clueless for what this triathlon had in store.

"Due to conditions on the top of the mountain all competitors are required to take hat, gloves, legging and waterproof top on the run"
A new experience placing a woolly hat in T2.
"It can't be that mountainous surely?" I'm thinking.
North Wales. The perfect outdoor playground. Always Aim High, the company behind the Slateman, Sandman, Snowman Triathlon series had utilised the stunning Snowdonia scenery to perfection. My original plan at the beginning of the season had been to enjoy Slateman as a scenic/different race. Then crack on with the 'normal' races. Slateman blew my mind, the sound of cowbells rang in my ears for days after, alongside the memory of running up the Dinorwig slate quarry zig zags. Most of all, it was the friendliness of the staff, volunteers, supporters and fellow competitors that made the weekend so memorable. After hearing that the male and female with the lowest cumulative time would win a weeks holiday to the Caribbean Island of Nevis, I committed to returning in a bid to win the prize and experience the North Wales magic twice more.

North Wales; an outdoor paradise, designed to be played in.

Saturday afternoon, I stood outside on the wooden balcony of Plas y Brenin National mountain centre, Capel Curig. The Snowman race HQ, being interviewed by Arwyn & his pretty intimidating TV camera.
"How do you feel about the race?"
I'm pretty nervous I say, looking up at the mountain tops draped in cloud.
I think back to earlier in the day, swimming in the lake with Adam and Chris, the water temperature,surprisingly OK, it was the shivering and degree of coldness I felt once out and stood in my wet triathlon suit that concerned me. The prospect of jumping on my bike and cycling 69km in a wet cold triathlon suit, was not an appealing one. T1 would be spent pulling on warm layers I decided. Arm warmers, a dry T-shirt and socks I hoped, would hold off hypothermia. I don't mention this, I rattle something off, tried to crack a joke or two (very badly, I'm no comedian, though I often forget this) 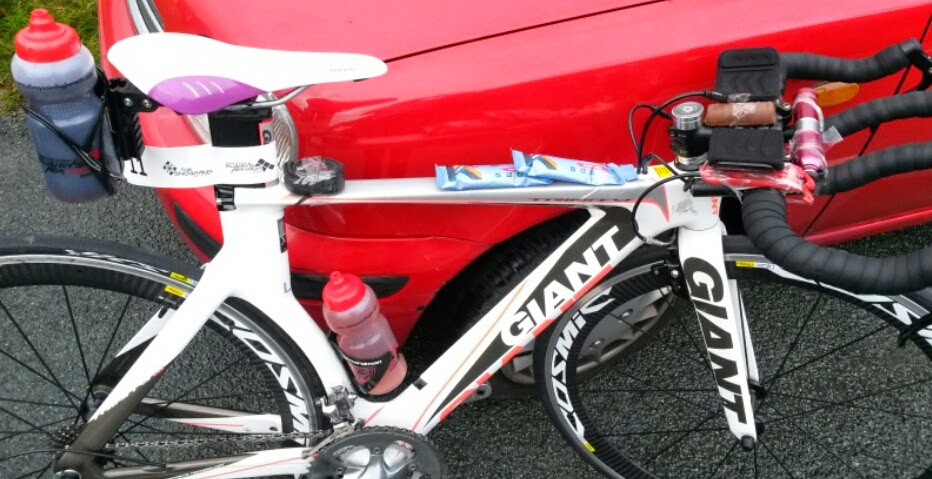 Nervous about getting a puncture I attached the spare inner tube, pump and tyre levers to my bike along with a chocolate bar, 2 gels and coke. The chocolate bar fell off, I managed 2 swigs of coke and thankfully i didn't succumb to any punctures.
"You won the Slateman, you won the Sandman, can you win the Snowman & that Caribbean holiday?"
The Caribbean holiday, something I had been trying not to think about, yet the topic all my friends and family asked me about. Yes I had a good time buffer over Dorothy the second place female in the series but I knew anything could happen, a puncture or two? A twisted ankle on the mountain. I tried to fob the question off, trying to convince myself I was only focussing on the race. A harder task than I thought.

So yes I came out of the dark, cold lake still in one piece, I hadn't turned into an ice block. Yes I stuck to my plan of putting my arm warmers and T-Shirt on. Though I forgot the socks. The bike had it all. Long gradual ascents, long sweeping descents, short steep climbs, tight turns, dramatic mountain scenery, rain and sunshine. 69km of challenging riding. 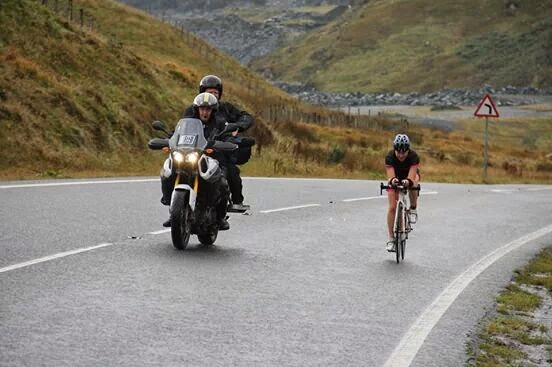 I entered T2 as first female having dug my teeth into the hills. Socks and new trail shoes on. Moel Siabod, lets be hav'in ya! Ahh so we are going all the way to the top, I realised as I clambered over one of the styles and looked up. Lesson learnt, do not look up.
"Do not look up, just keep putting one foot infront of the other"
"This is flipping ridiculous!"
(Just two of the less explicit thoughts whirling round my head)
I touched the cairn that marked the top of Moel Siabod and turned ready for the descent. Wow! The clouds had cleared and a 360 degree vista appeared, including Snowdon and the surrounding mountains. The torture of ascending was quickly forgotten I was like a kid in a candy shop, or more accurately a Geography graduate in Geography heaven! Quickly realising I was not out for a days geography field trip. I slipped, slid, fell and trundled back down. My descending skills being far worse than my ascending. 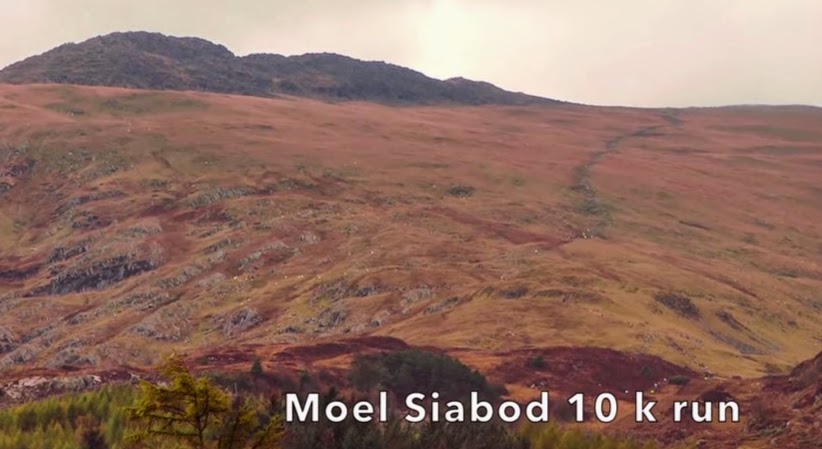 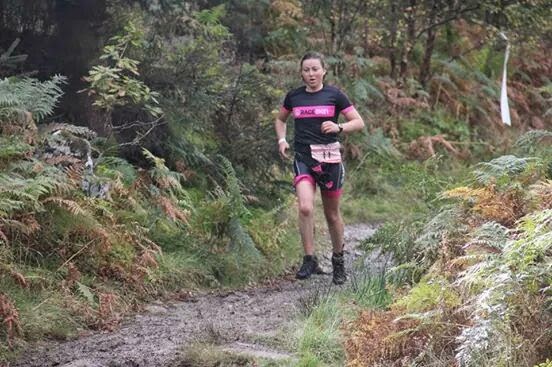 3hours 40minutes of fun in the mountains and I felt that sweet sensation of breaking the tape. A new course record was a bonus alongside the knowledge I had won the series and booked my seat to Nevis. Chris made a great race video that you can enjoy here and there is a race report here 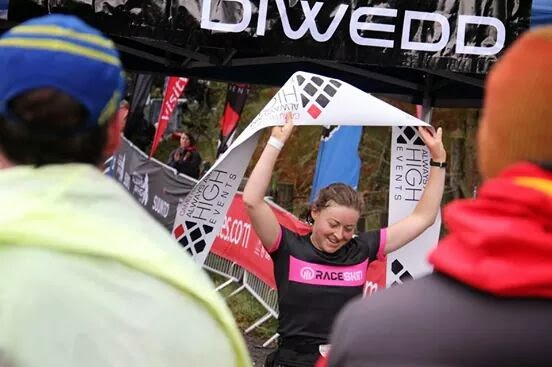 Good to christen the new RaceSkin Kit with a win. Thanks RaceSkin

Once more the supporters with their cowbells, fellow competitors, race volunteers and staff made this a truly spectacular race. For me the weekend had been made by staying with fellow competitor Stell and her two sons Mabon and Merin who generously hosted Adam, his Dad Chris and Myself in their incredible house in Dinorwig perched on the side of the mountain. We let off Chinese lanterns on the Saturday night, feasted on incredible food and were been made so very welcome. Lots of laughter, stories and adventures were shared so Thank You Stell, Mabon, Meryln, Adam and Chris for a fantastic weekend.
Not only Thank You but Well Done Stell on winning your age category, and your swim events in the Gala the day before! 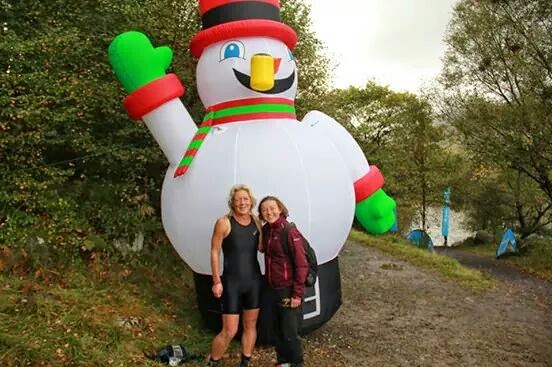 Thanks Stell for being such a fantastic host. 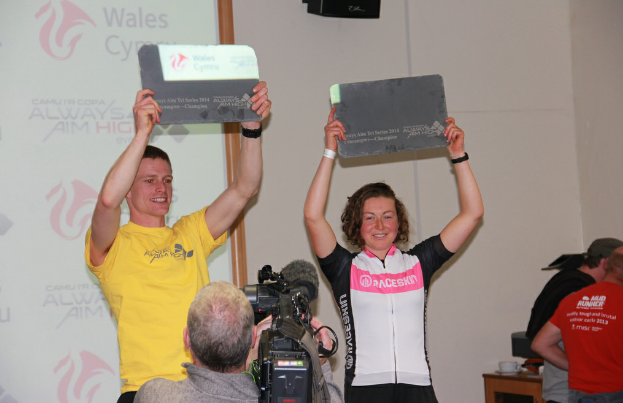 Well Done Ewan for winning the series on the male side. Looking forward to our trip to Nevis!

Finito. For me the 2014 triathlon season is done. My training diary for the next 2 weeks is completely empty. Thanks Lou! My body very much looking forward to being given a breather.

"Are you seriously going to do that? I'm not sure that's realistic!" Is my mums response to hearing my plans for the next week.
"Realistic" it's a good job I have always had my own interpretation of this.
Maybe in the next blog post I will tell you whether or not it was "realistic" and how it went....!
A huge Thank You to Always Aim High. The Slateman, Sandman and Snowman have been  a blast. I could now go into the roofing tiling business! 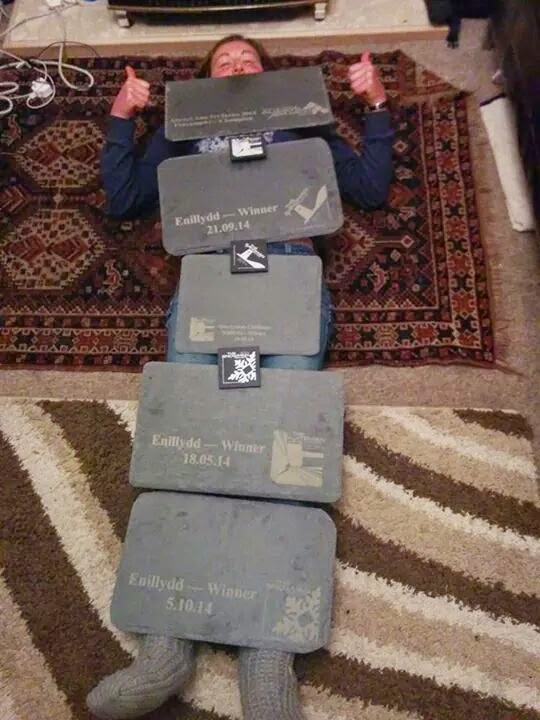